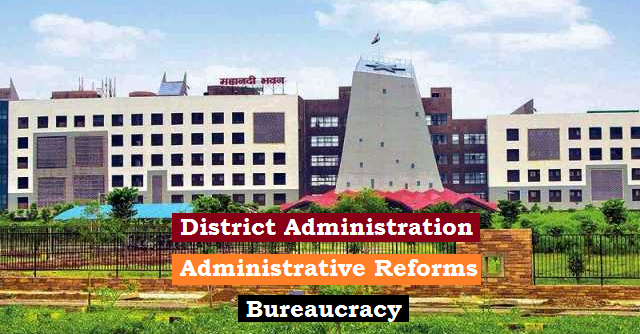 It has three distinct elements:

Types of Administrative Reforms: Reforms are imposed through

Bureaucracy is a system of administration under which all the employees are organized into a hierarchy of offices, with well-defined spheres of duties and responsibilities.

It is the law-making power conferred by the Legislature on the executives. The delegated legislation is subject to judicial review, like any other legislation.

The increased in volume of work, expertise required for some issues and o deal with unforeseen contingencies delegated legislation is needed.

The District Administration is the focal point for field level organizations and implementation of all government contingency plans related to disaster management. Considerable powers have therefore been vested in the District Collector to carry out operations effectively in the shortest possible time.

Collector is the most recognized face of the administration; he is considered to be the principal representative of the government at the district level, who could be approached to solve virtually all problems ranging from land disputes, scarcity of essential commodities, relief in times of crisis, community disputes, etc.

The District Administration is required to prepare in advance a contingency district disaster management plan depending on the type of disasters likely in the district. Contingency Plans are required to keep into account the type of preparedness and the relief material required to be mobilized.

The concerned departments need to work together in a coordinated manner and provide an efficient feedback and monitoring system to the District Collector.

Role of the Collector in District Administration:

The office of the Collector is an important institution transmitted by the British rulers to the Indian administrative system. He performs traditional revenue function as well as development functions.  Throughout the country, the power and functions of the Collector, more or less, remain the same.