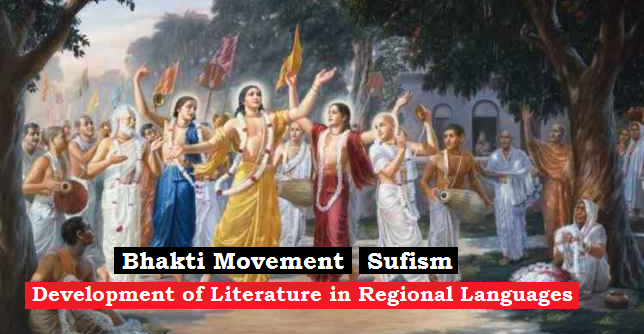 Bhakti Movement which stresses mystical union of the individual with God was there before the arrival of Turks.

Lord Vishnu was worshiped as a personal God, many holy books were re-written in Gupta period and Bhakti was accepted as one of the means to salvation along with Jnana and Karma.

Saguna Bhakti is the worship of and devotion to a manifested deity who takes the form of an idol, an image or an incarnation. Some of the important names of this period are:

Sufism is a religion of intense devotion; Love is its manifestation, poetry, music and dance are the instruments of its worship and attaining oneness with God is its ideal.

They organized themselves into 12 Orders, each led by a prominent mystics.

All orders were broadly divided into two:

Two orders who acquired significant influence in north India were:

Growth of Literature in Regional Languages

During the medieval period (13-15 century), there came a large number of regional dynasties into existence and many regional languages were born. Though the development was directly influenced by Persian, it retained its indigenous color, in close contact with its cultural surroundings.

With patronage from regional polities and spread of Bhakti movement many literary works of high quality were produced in regional languages like Hindi, Marathi and Bengali, which had developed earlier in 8 century and so.

The literature in regional languages were marked by regional spirit and identity. The emergence of all these languages resulted in the decline of Sanskrit as they came to be used as the medium through which the
administrative machinery functioned. Bhakti Movement influenced the prose and poetry that were being composed and Poetry now became largely devotional in nature.