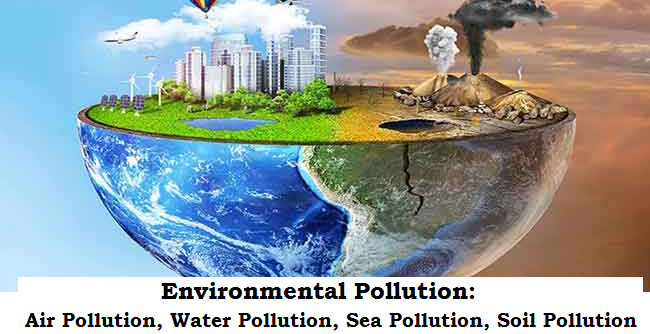 Pollution is the effect of undesirable changes in our surroundings that have harmful effects on plants, animals and human beings. During the last few decades we have contaminated our air, water and land on which life itself depends with a variety of waste products.

Pollutants include solid, liquid or gaseous substances present in greater than natural abundance produced due to human activity, which have a detrimental effect on our environment.

From an ecological perspective pollutants can be classified as follows:

Degradable (or Non-persistent Pollutants): These can be rapidly broken down by natural processes.

Slowly Degradable (or Persistent Pollutants): Pollutants that remain in the environment for many years in an unchanged condition and take decades or longer to degrade.

Eg: DDT and most plastics.

Non-Degradable Pollutants: These cannot be degraded by natural processes. Once they are released into the environment they are difficult to eradicate and continue to accumulate.

Air pollution occurs due to the presence of undesirable solid or gaseous particles in the air in quantities that are harmful to human health and the environment.

Pollutants are also found indoors from infiltration of polluted outside air and from various chemicals used or produced inside buildings. Both indoor and outdoor air pollution are equally harmful.

Particulates are small pieces of solid material (for example, smoke particles from fires, bits of asbestos, dust particles and ash from industries) dispersed into the atmosphere.

When the quality or composition of water changes directly or indirectly and becomes unfit for any purpose it is said to be polluted.

Point Source: When a source of pollution can be readily identified because it has a definite source and place where it enters the water.

Non-point Source: When a source of pollution cannot be readily identified, such as agricultural runoff, acid rain, etc, they are said to be non-point sources of pollution.

Water pollution can be controlled by two fundamental approaches: preventive techniques and effluent control. While the foremost necessity is prevention, setting up effluent treatment plants and treating waste through these can reduce the pollution load in the recipient water. The treated effluent can be reused for either gardening or cooling purposes wherever possible.

Sea (Marine) pollution can be defined as the introduction of substances to the marine environment directly or indirectly resulting in adverse effects on marine life and activities.

•   Pesticides and fertilizers: From agriculture they are washed off the land by rain, enter water courses and eventually reach the sea.

•   Petroleum spillage and dredging of sea: Ship accidents and accidental spillages at sea therefore can be very damaging to the marine environment. Shipping channels in estuaries and at the entrances to ports often require frequent dredging to keep them open. This dredged material that may contain heavy metals and other contaminants are often dumped out to sea.

•    Offshore oil exploration: Oil that is extracted from the seabed contains some water. Even after it is passed through oil separators the water that is discharged contains some oil, which adds to marine pollution. Uncontrolled release of oil from the wells can be catastrophic events resulting in oil pollution.

Water pollution can be controlled by two fundamental approaches: preventive techniques and effluent control. Some of the important measures include:

Soil pollution is defined as the presence of toxic chemicals (pollutants or contaminants) in soil, in high enough concentrations to pose a risk to human health and/or the ecosystem.