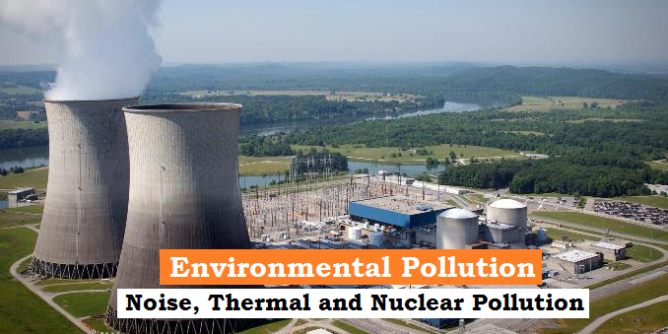 Pollution is the effect of undesirable changes in our surroundings that have harmful effects on plants, animals and human beings. During the last few decades we have contaminated our air, water and land on which life itself depends with a variety of waste products.

Noise is undesirable and unwanted sound. The differences between sound and noise is often subjective and a matter of personal opinion. Sound is measured in a unit called the ‘Decibel (dB)’. The permitted noise level is 125 decibels, as per the Environment (Protection) (second amendment) Rules, 1999.

There are four fundamental ways in which noise can be controlled. In general, the best control method is to reduce noise levels at the source.

The discharge of warm water into a river is usually called a thermal pollution.

It occurs when an industry (e.g. power plants) removes water from a source, uses the water for cooling purposes and then returns the heated water to its source.

Power plants heat water to convert it into steam, to drive the turbines that generate electricity. For efficient functioning of the steam turbines, the steam is condensed into water after it leaves the turbines. This condensation is done by taking water from a water body to absorb the heat. This heated water, which is at least 15 degrees higher than the normal is discharged back into the water body.

The warmer temperature decreases the solubility of oxygen and increases the metabolism of fish. This changes the ecological balance of the river.

Tropical marine animals are generally unable to withstand a temperature increase of 2 to 3 degrees and most sponges, mollusks and crustaceans are eliminated at temperatures above 37 degrees. This results in a change in the diversity of fauna as only those species that can live in warmer water survive.

Thermal pollution can be controlled by passing the heated water through a cooling tower after it leaves the condenser. The heat is dissipated into the air and the water can then be discharged into the river or pumped back to the plant for reuse as cooling water.

Construction of a large shallow cooling pond is used to dissipate heat from the hot water pumped into one end of the pond and cooler water is removed from the other end.

Any undesirable effect caused to the environment due to radioactive substances or radiations is called nuclear pollution.