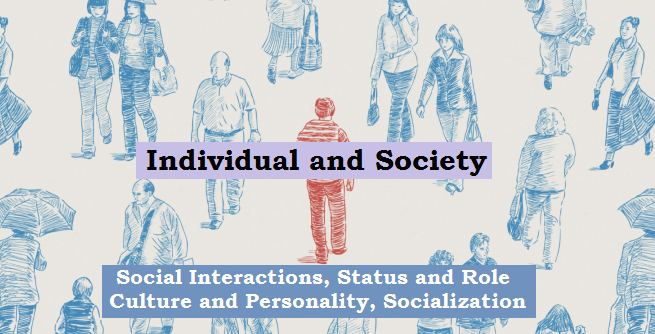 A social interaction is an exchange between two or more individuals and is a building block of society.

Social structures and cultures are founded upon social interactions. By interacting with one another, people design rules, institutions and systems within which they seek to live. Symbols are used to communicate the expectations of a given society to those new to it, either children or outsiders.

Thus interaction is the basic ingredient of social relationships. The two essential conditions of social interaction are: social contact and communication.

Status: A position occupied by an individual in a social system with defined rights and duties

Each status typically includes a number of roles. For example, a teacher has different roles towards his students, fellow teachers and his principal. Similarly, a doctor in a society has both a status and a role to perform. He is perceived as a protector and a person who is honored by the society because of the role he performs.

Role Conflict: When there is incompatibility among roles corresponding to multiple statuses, it is referred to as role conflict. It occurs when contrary expectations arise from two or more roles to be performed.

For example, a supervisor at a factory may feel strain due to her role as friend and mentor to the subordinate employees, while having to exhibit a stern and professional watchful eye over the employees.

Culture: A way of life in which all members of society participate which includes beliefs, customs, art, law or other habits acquired by man as a member of the society.

Cultural Lag: The gap emerged when material aspect of culture changes at faster pace than the non-material aspects (cognitive and normative).

Personality: The term personality is derived from the Latin word persona meaning a mask or character. Personality can be defined as an individual’s characteristic pattern of thought, emotion, and behaviour.

Relationship between Culture and Personality:

Culture plays a valuable role in personality development. Many Sociologists considers personality as an individual aspect of culture while culture is a collective aspect of personality. The ideas and behaviour of the individuals are largely the results of cultural background.

The culture furnishes the raw material of out of which the individual makes his life. The social institutions of the particular society affect the personality of the group members. In every society from the moment of birth, the child is treated in such ways which shape his personality. Every culture applies a series of general influences upon the individuals who grow up under it.

It’s a process by which we learn and internalize the norms and ideologies of a society.

Through socialization, we adopt the socially accepted behavior by learning its norms, attitudes, values, customs, etc. Socialization takes place at different stages such as primary, secondary and adult.