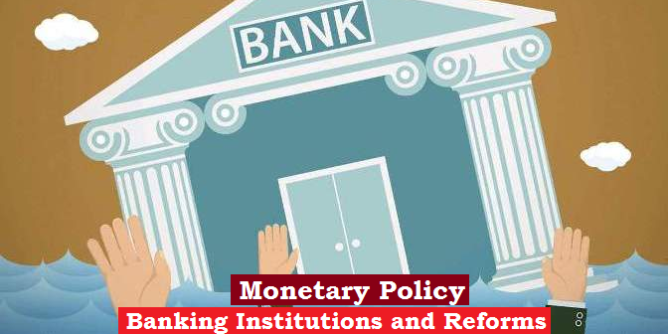 Monetary policy refers to the policy of the central bank (i.e. Reserve Bank of India) to control inflation and achieve the ultimate objective of economic policy in the country. It has fundamentally three components which are achieved through Monetary Policy Instruments:

1. Open Market Operations: These include both, outright purchase and sale of government securities, for injection and absorption of durable liquidity, respectively.

2. Bank Rate Policy: rate of interest commercial banks have to pay RBI if borrowed in case of shortage of reserves.

Cash Reserve Ratio (CRR): The average daily balance that a bank is required to maintain with the Reserve Bank as a share of such percentage of its Net demand and time liabilities (NDTL) that the Reserve Bank may notify from time to time.

Statutory Liquidity Ratio (SLR): The share of NDTL that a bank is required to maintain in safe and liquid assets (e.g. government securities, cash and gold, etc). Changes in SLR often influence the availability of resources in the banking system for lending to the private sector.

Marginal Standing Facility (MSF): A facility under which scheduled commercial banks can borrow an additional amount of overnight money from the Reserve Bank by dipping into their Statutory Liquidity Ratio (SLR) portfolio up to a limit at a penal rate of interest. This provides a safety valve against unanticipated liquidity shocks to the banking system.

4. Liquidity Adjustment Facility (LAF): The primary aim of such an operation is to assist banks to adjust to their day-to-day mismatches in liquidity, via repo and reverse rep operations.

Under the repo or repurchase option, banks borrow money from the RBI via the sale of securities with an agreement to purchase the securities back at a fixed rate at a future date.  Under the reverse repo operation, the RBI borrows money from the banks, draining liquidity out from the system.

Repo Rate: The (fixed) interest rate at which the Reserve Bank provides overnight liquidity to banks against the collateral of government and other approved securities under the liquidity adjustment facility (LAF).

Reverse Repo Rate: The (fixed) interest rate at which the Reserve Bank absorbs liquidity, on an overnight basis, from banks against the collateral of eligible government securities under the LAF.

Cheap money policy refers to a monetary policy by the central bank where the central bank sets low interest rates so that credit is easily available to the general public in order to bring efficiency in trade and commerce in an economy.

Commercial Bank is a bank that is formed for the commercial purpose and hence its primary aim to earn profit from the banking business.

On the other hand, Cooperative Banks are owned and operated by the members for a common purpose i.e. to provide financial service to agriculturists and small businessmen. It relies on the on the principles of cooperation, such as open membership, democratic decision making, mutual help.

Non-Banking Financial Company (NBFC): A company registered under the Companies Act, 1956 and is engaged in the business of loans, advances and deposits (time deposits only).

NBFCs are doing functions akin to that of banks; however there are a few differences:

Time Deposit Vs Demand Deposit: Term Deposits, also known as Time Deposits, are investment deposits made for a predetermined period, ranging from a few months to several years. Demand Deposit accounts offer greater liquidity and ease of access as compared to term deposits.

Banks provide the fund to MFIs and thereafter MFIs lend to low-income households based on the group lending method.

Non-Banking Financial Companies are playing a significant role in providing accessible and affordable financial services. The NBFCs are becoming a vital player in financial inclusions indirectly boosting the economy. They contribute to the economy in the following manner:

In the backdrop of 1991 Crisis New Economic Policy was launched with focus on:

1. Structural adjustment: to reduce current rigidity and bottle necks
2. Stabilization program: to bring the economy back

Narasimhan Committee Report I (1991): Committee on the Financial System

On the recommendations of Narasimhan Committee the following reforms were undertaken in the Banking Sector:

The East Asian crisis in 1997 led to a heightened appreciation of the importance of a strong banking system, not just for efficient financial intermediation but also as an essential condition for macroeconomic stability.

It put forward the following recommendations.

In its final report, the Committee has outlined six vision statements for full financial inclusion and financial deepening in India:

PJ Nayak Committee (2014): Committee to Review Governance of Boards of Banks in India