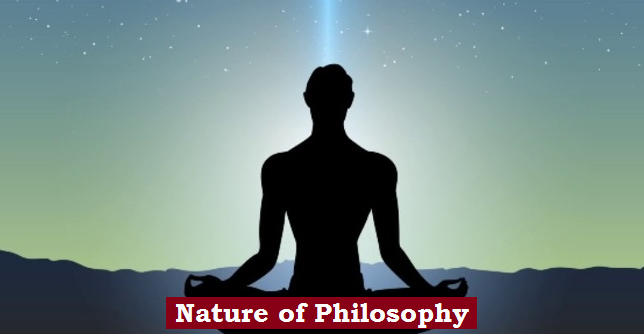 It deals with the intellectual exercise concerned with the nature of reality from human perspective.

It is the study of general and fundamental questions, such as those about reason, existence, knowledge, values, mind, and language. Such questions are often posed as problems to be studied or resolved.

Philosophy is considered as the ‘mother of all subjects’ because it has all other disciplines as its subject matter. Historically, the practice of philosophy helped give rise to a wide variety of disciplines, ranging from self-cultivation to political theory to mathematics and the empirical research of the natural and social sciences.

It makes inquiry into issues emerging in human life and issues that confront human beings- social, political, moral, religion, etc. Its inquiry gains significance in explicating the real meaning or goal of life.

It endeavors to explain through speculative reasoning the possible answers to the mysteries of life. Since each philosopher develops his own answer in accordance to his intellectual caliber we have variety of philosophical truths.

Relation of Philosophy with Religion and Culture

The concept of religion centers on supernatural power-God, not from an internal experience but based on belief and faith (external revelation).

Philosophy and Religion-Culture are complementary:

Philosophy provides intellectual base to religion through logically explaining the religious beliefs, assumptions and makes it more relevant and scientific. Similarly religion provides significance to philosophy. Philosophy without religion will lead to dry intellectualism (dogmatism). Religion without philosophy will be blind observance (superstition). Hence both philosophy and religion are complementary in clarifying the subtle implications of all rituals.

Similarly culture forms the background for Philosophy and Philosophy is the manifestation of culture.

Philosophy of Religion is rational explications and justifications for religious beliefs based only on reason not faith like that of religion.

Astika (Sanskrit: asti, ‘there is, there exists’) means one who believes in the existence of a Self/Soul or Brahman, etc. It has been defined in one of three ways:

Nastika (Sanskrit: na, ‘not’ + astika) by contrast are those who deny all the respective definitions of Astika; they do not believe in the existence of a Soul or Self.

The four most studied Nastika Schools of Indian philosophies, sometimes referred to as heterodox schools are Buddhism, Jainism, Charvaka, and Ajivika.