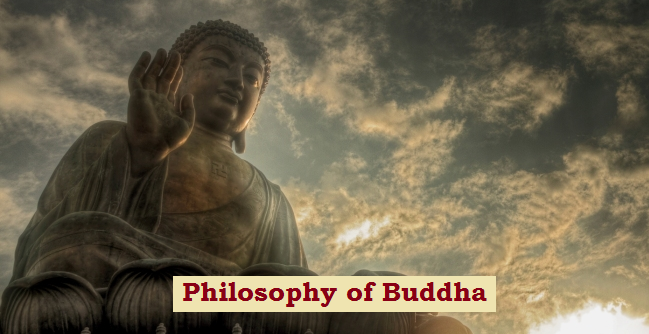 Buddhist Philosophy is one of the Nastika or Heterodox Schools of Indian philosophy. Most Buddhist traditions emphasize on the attainment of Nirvana-ending the cycle of death and rebirth by conquering desires.

In Buddhism, the three marks of existence (Trilaksana) are three characteristics of all existence and beings, namely impermanence (Anicca or Anitya), non-self (Anatta) and suffering (Dukkha). It asserts that the delusion about these three marks results into suffering (Dukkha) on account of desires and recommends an Eight Fold Path (Ashtanga Marg) of meritorious life for the elimination.

Like those of the Mahavira, Buddha’s doctrines were formulated as a reaction to and rejection of Brahmanism (a religion based on the Hindu scriptures, the Vedas and Upanishads) which was then taking shape. Therefore, it is a Nastika or Heterodox Schools of Indian philosophy.

It provides the insight about the universal truth- suffering (Dukkha) and its ending. They are:

1. Dukkha: there is suffering in the world

2. Dukkha Samudaya: the suffering has a cause/origin

3. Dukkha Nirodha: there is a cessation of suffering

4. Dukkha Nirodha Magga: there is a path to end of suffering

According to Sasvatvada, some things are eternal, uncaused, and independent and according to Uchedvada, nothing remains after the destruction of things. By maintaining a middle way between both these principles, Pratityasamutpada holds that things have existence but they are not eternal and they are not annihilated completely. Thus, it is a middle path where the world is neither a being nor a non-being.

According to Buddhism everything in this world has a cause. There is a cycle of twelve such causes and corresponding effects which governs the entire life of human beings.

The cycle of twelve links (Nidanas) of Pratityasamutpada is:

Among these twelve links the first two are related to our past life, the last two to future life and the rest to present life. Hence, it is considered as the cycle of birth and death. It is the vicious circle of causation which never ends with death. Death is regarded as the beginning of a new life. It is called Bhava-chakra. The twelve links of dependent origination can be destroyed only when its root cause ignorance is destroyed.

The doctrine of Pratityasamutpada opposes to Accidentalism (events on accident), Naturalism (effect on inherent nature), Fatalism (events by fate) and Supernaturalism (event by God).  Hence, Buddhism accepts that all existences physical and psychical are subject to the law of universal causation. Nothing is uncaused and eternal.

Buddhism prescribes a disciplined wisdom, morality and mediation based an eightfold virtue (Ashtanga Marg) than can destroy the suffering. The eightfold path is the practical application of the four noble truths. The eight virtues will help a person to grow in ethical conduct (Sila), mental discipline (Samadhi), and wisdom (Panna).

The components of it are:

Buddhism is unique in denying the existence of a soul or Atman. It is the view that there is no unchanging, permanent self, soul or essence in phenomena.

The physical material is impermanent, whatever is impermanent is the cause of suffering, and whatever is suffering is non-self. Similarly, sensations, mental formations, and consciousness cannot constitute the self because all these are transient.

It is the consequence of the doctrine of dependent origination. Buddhism analyzes the person through the five aggregates or groups (Panch Skandhas), and then attempting to show that none of these five components of personality can be permanent or absolute.

Panch Skandhas: 5 aggregates of an individual

Anything a man thinks he is or he has, fall under one of these groups. The self or soul is simply an abbreviation for the aggregate of these Skandhas, and not some entity over and above the aggregate. Thus there is no distinct substance known as the ‘self’ or ‘soul’ which is permanent and unchanging.

However, Buddha does not deny man as a self or a soul but rejects the permanent and unchanging substantial self.

According to Kshanikavada, everything is momentary, relative, conditional, and dependent. It is also known as the doctrine of impermanence (Anityavada). Buddhism teaches the impermanence, momentary nature of the world and its objects. None of them is substantial. They are appearances empty of substance or reality (Sunyata).

It is also the consequence of the doctrine of dependent origination. Every object comes into existence from an antecedent condition and gives rise to a consequent object. It is comparable to the flame of a lamp, where the flame is merely the continuity of successive flames.

According to Buddha, the existence is transformation. It is a series of successive states. All things undergo changes indicated in Utpada (origination), Sthiti (staying), Jara (growth) and Nirodha (destruction).

This doctrine is ultimately to dissuade people from placing confidence in the world and persuade them to renounce it for the permanent status of Nirvana. It avoids two extremes: Eternalism and Nihilism. Thus, it is a middle path where the world is neither a being nor a non-being.

All forms of Buddhism revere and take spiritual refuge in the “three jewels” (Triratna): Buddha, Dharma and Sangha.