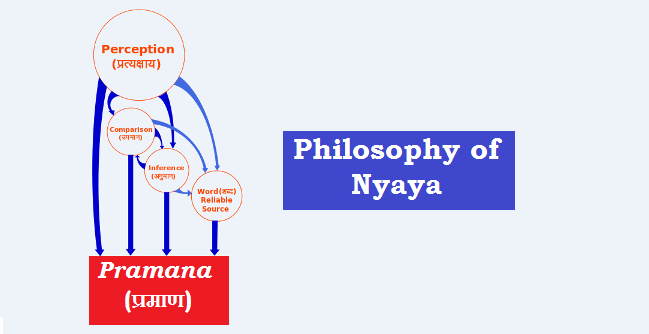 Nyaya means right thinking with proper arguments and valid reasoning. Therefore, it is also known as Tarkashastra  (the  science  of  reasoning). Nyaya School of thought is adhered to atomistic pluralism and logical realism. It is atomistic pluralism on the account that atom is the constituent of matter and there are not one but many entities, both material and spiritual, as ultimate constituents of the universe. It is a system of logical realism by adapting the doctrine that the world exists independently from our perceptions and knowledge. This school is founded by the sage Akspada Gautama.

Theory of knowledge: Prama and Aprama

According to Nyaya, knowledge reveals both the subject and the object which are quite distinct from itself. Knowledge may be valid or invalid. Valid knowledge is called Prama and, is defined as the right apprehension of an object.  Non – Valid knowledge is known as Aprama.

Invalid knowledge is defined as the wrong apprehension of object. It includes memory (Smruti), doubt (Samsaya), error (Viparyaya), and hypothetical reasoning (Tarka). Memory is not presentative but representative knowledge. Memory can also consider as a source of valid knowledge provided what is recalled or remembered were experienced in the past as a presentative cognition.