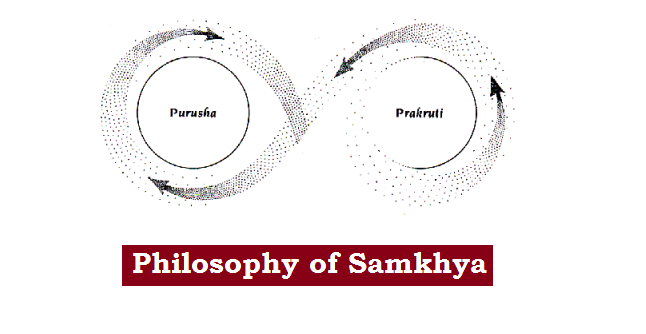 The Samkhya Philosophy  is regarded as dualistic realism; dualistic because it holds the doctrine of two  ultimate realities: Prakriti (non-self) and Purusa (self). It is realism because it views that both matter (non-self) and spirit (self) are equally real; also both are radically different form each other, as like, subject and  object.

The word Samkhya is derived from the word ‘Samkhya’ which means number as well as right knowledge. Right knowledge is about understanding the reality. Samkhya Philosophy argues for the cause of evolution of the world, the role of Purusa and Prakriti for the creation of the universe, valid sources of knowledge, and on the existence of God.

According to Samkhya Philosophy, Prakriti is the ultimate (first) cause of all objects, including our mind, body and sense organs. It is observed that every effect must have a cause. Cause and effect are two inseparable components stand for all sorts of creation in the cosmos. Hence, all objects of the world are bounded in the chain of cause-effect relation, named as ‘Satkaryavada’.

It explains the effect exists in its material cause prior to its production. For example, curd was existing in the milk before comes into existence. Hence, the effect is not a real beginning or a new creation. It is also named as Parinamavada.

Purusa is the transcendental self or pure consciousness. It is absolute, independent, free, imperceptible, above any experience by mind or senses and beyond any words or explanations. It has been described as, devoid of three Gunas and is eternal- not subject to change (inactive). It is the basis of all knowledge and is the supreme knower.

According to Samkhya Philosophy, the Purusa is of the nature of pure consciousness and hence beyond the limits of Prakriti.

Samkhya has given the following arguments for establishing the existence of Purusa:

Samkhya Philosophy believes there are pluralities of Purusa and all these Purusas are identical in their essences and they are embedded with consciousness. Hence, consciousness is found in all the selves. This view is similar to Jainism and Mimansa because they believe in the plurality of selves.

Prakriti is the first and ultimate cause of the universe- of everything except the Purusa. It is also eternal, but unconscious, and active.

Objects are the effects of Prakriti. These are dependent, relative, many and non-eternal because they are created and destroyed.

Samkhya has given the following arguments for establishing the existence of Prakriti:

The Samkhya Philosophy advocates three Gunas of Prakriti: Sattva, Rajas and Tamas. The word ‘Guna’ is understood here as quality or attribute.

Prakriti is a state of equilibrium of these three Gunas. Sattva, Rajas and Tamas contradict as well as cooperate among each other to produce an object. None of them exist alone.

When these Gunas are held in a state of equilibrium (Prakriti State), evolution of worldly objects does not take place at this state. These Gunas are said to be ever – changing or transforming (Parinama) and cannot remain static even for a moment.

Change is said to be of two kinds:

The world and worldly objects are created because of the contact between Prakriti and Purusa. The Prakriti alone can’t create the world because it is material. In the same manner the Purusa can’t create the world independently because he is inactive. Hence, the contact between Prakriti and Purusa is necessary for the evolution to start though they are possessing different and opposite natures.

There is no real contact took place between them, but their mere closeness with each other disturbs the stability of the Gunas of Prakriti. Evolution begins as a result of these disturbances (transformations) and one product produces another product in the next order.

Thus the process of evolution of the universe includes the operation of 24 principles, of which Prakriti is the first, the 5 gross elements are the last and 10 organs and 5 Tanmatras are the intermediate ones. The evolution of Prakritiinto the world of objects makes it possible for the selves to enjoy or suffer the consequences of their good or bad actions. The ultimate end of evolution of Prakriti, therefore, is the freedom (Mukti) of Purusa.