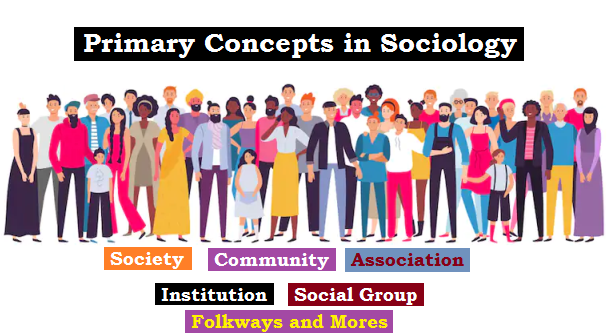 The term society is most fundamental to sociology. It is derived from the Latin word socius which means companionship or friendship.

Society is a network based on social relationship between people.

Maclver defines society as a web of social relationship.

Community is a group of people who interact with one another within a bounded geographic territory, often sharing common values, beliefs, or behaviors.

A group of people organized for the pursuit of common interest.

It is an arrangement of integrated set of social norms organised around the preservation of basic social values.

Institutions can refer to mechanisms which govern the behavior of a set of individuals within a given community; moreover, institutions are identified with a social purpose.

Characteristics of an Institution:

It is a group of people who interact with each other and share similar characteristics and a sense of unity.

Social Groups are dynamic in nature, though some internal changes keep occurring.

Folkways: Norms of society that come into effect to have similarities (rather conformity) in behaviour. They are unwritten and no penalties for their violation. They are learnt by observing others.

Mores: Norms of society that have a formal way of ensuring their compliance. Violation of these attracts severe punishment of society. They focus greater importance of the welfare of the society.