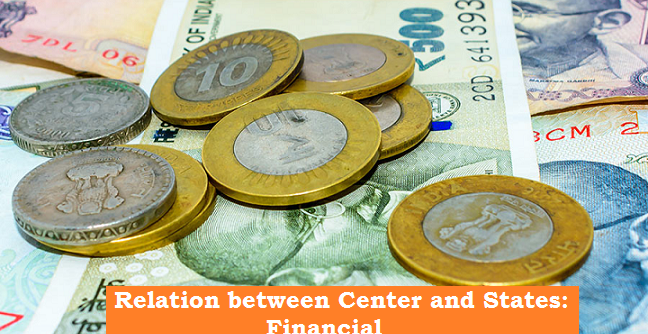 The Constitution of India, being federal in structure, in Part XI divides powers- legislative, administrative, financial- between the Center and the States.
The Center- State relations can be divided under three heads:

Indian Constitution (Art 268- Art 293) has made elaborate provisions for sharing financial resources.
Constitution divides the taxing power between Center and the States through Union, States and Concurrent Lists.

Other items on State list: Excise duties on alcohol and narcotics, Sales tax (other than newspaper)

The proceeds of the taxes in the State List are entirely retained by the State. However, proceeds from Union List are also allotted to the States partially.

There are five categories of Union Taxes which are assigned to the States:
1. Duties levied by the Union but collected and appropriated by the States (Art 268): Stamps duties and duties of excise on medicinal and toilet preparation containing alcohol and narcotics

2.  Service Tax levied by center but collected and appropriated by both (Art 268A):
Service tax on services, collection and appropriation by the Parliament

4.  Taxes levied and collected by the Union and distributed between the Union and the States (Art 270):
Income Tax not including Corporation Tax, (on the recommendation of Finance Commission)

Grant-in-aid:
Constitution also provides for grant-in-aid to the states from central resources. Three types of grants:
1. Statutory Grants (Art 275): Financial assistance to states in need and not to every state

3.  Other grants: Grants in lieu of export duty on jute and jute products to some States (Art 273)

Loans:
Apart from these, Constitution also empowers the State with borrowing power, within India (Art 293) upon the security of the Consolidated Fund of State.

Loans by the Center to the States are to be charged from the Consolidated Fund of India.

A State cannot raise any loan without the consent of the Center if any loan or a part is still out- standing to the Center.

Finance Commission (Art 280):
To be constituted by the President every fifth year or earlier to recommend him on:      2014 (20’)
1. Distribution taxes between Center and the States
2. Principles to govern grants-in-aid out of the Consolidated Fund 3. The measures needed to augment the Consolidated Fund of a State to supplement the resources of the Panchayats and municipalities (on Finance Commission of the State’s recommendation)

4. Any other matter referred by the President in the interests of sound finance.