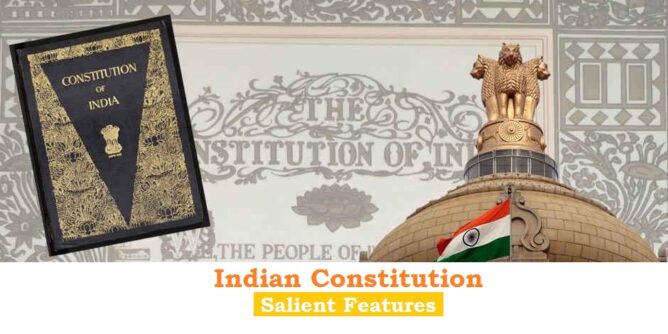 3. Rigid and flexible system for amendment 2014 (04)
Based on flexible system as in simple majority and rigid as special majority. Some provision even more rigid requirement of ratification at least by half of the states.

5. Federal system with unitary bias
Not a ‘federation’ (not mentioned) but a union of states with no right to secede
(Quasi- Federal or Federal in form but Unitary in spirit)

6. Parliamentary system
Based on the principle of co-ordination and cooperation between Legislature and Executive branches

7. Parliamentary sovereignty and judicial supremacy
Amendment and law making power with the Parliament and Judicial Review with the Judiciary

8. Separation of power
Separation of functions, duties and responsibilities of Legislature, Executive and the Judiciary

11. Directive principles:
For promoting the idea of economic and social democracy
Seek to establish a ‘welfare state’
They impose a moral obligation to states