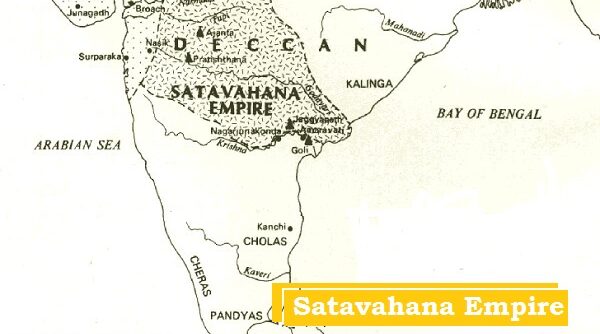 On the ruins of Mauryan Empire, Satavahana Dynasty was built in 1 century BC by Simuka who destroyed the Shunga power and established peace in the Deccan region. They have been mentioned as Satavahanas, Satkarnis and Andhras in Puranas.

They had their capital at Pratishthana. They followed the Mauryan administrative structure.

The dynasty reached its zenith under the rule of Gautamiputra Satakarni and his successor Vasisthiputra Pulamavi. The kingdom fragmented into smaller states by the early 3rd century AD.

Decline of the Satavahanas

The dynasty was soon extinguished following the rise of its feudatories, perhaps on account of a decline in central power. Pulamavi IV who ruled until 225 AD, is considered the last king of the main Satavahana line.

Several dynasties divided the lands of the kingdom among themselves. Among them were: