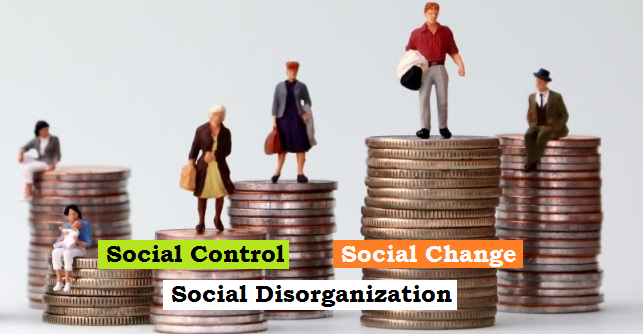 Social Control refers to enforcing the values and patterns of the society in the unruly and undisciplined members.

Various means of social control are used for maintaining order and stability in the society. Social control can also be exercised in form of reward and punishment, it means rewarding for doing good and punishing for offense.

It can be defined as the changes in the society that are significant– have a big impact spread over a large sector of society.

Social Organization: It is the tendency within established social system that resists and regulates any change.

Emile Durkheim defined it as

Social organization provides the means by which a society maintains its unity and cohesion through effective control of its members and functions smoothly. Social disorganization causes weakening of solidarity, loss of control over its members and therefore conflict and disintegration.

If an individual (or group) goes against the socially accepted behaviour pattern, there can be an anomie situation.

According to Emile Durkheim, in an anomie situation following conditions exist:

According to Robert Merton, anomie arises when there is an acute disjunction between the cultural norms and individual capacities to act accordingly.

Situation where there is less integration among the people and they do not feel connected to each other.

When a person is engaged in the lower rungs of capitalist system, he is separated from the nature and other human beings, their work and self too.

For Marx the division of labour and class conflict brought about social stratification, which resulted in alienation. These for Marx were the crucial elements of modern society.

According to him, capitalism leads to four distinct ways of alienation:

Similarities between Anomie and Alienation:

Dissimilarities between Anomie and Alienation:

There are unequal opportunities and rewards for different social positions or statuses within the society. Inequalities are based on gender, race, skin colour, economic conditions, etc.

Social resources can be divided into three forms of capital: