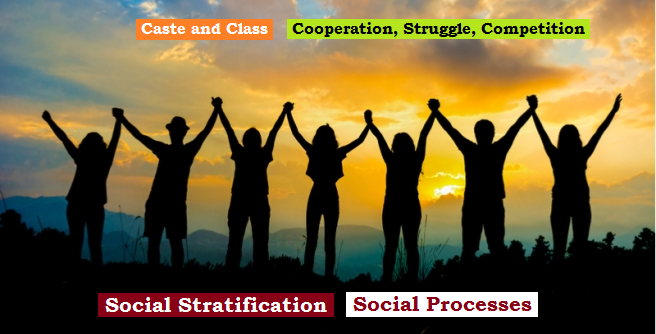 Social Stratification refers to the existence of structured inequalities between groups in the society, based on socio-economic factors like wealth, income, race, education, gender, occupation, and social status, or derived power (social and political).

It is made up of human actions and relationship and their repetition over years to form institutions.

Caste: Caste is that extreme form of social class organization in which the position of individuals in the status hierarchy is determined by descent and birth.

Class: A social class is a category of people who have a similar socio-economic status in relation to other segments of their community or society.

Social processes refer to forms of social interaction that occur repeatedly, through which individuals and groups interact and establish social relationships.

There are several of forms of social interaction such as cooperation, conflict, competition and accommodation etc. They are universal features of all societies and focus on social sustainability.