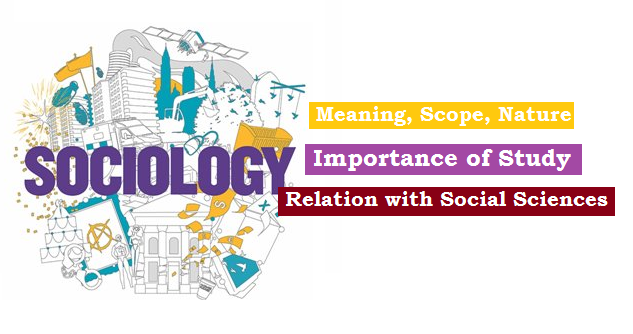 The word sociology is derived from both Latin and Greek origins.

According to Max Weber,

August Comte is considered as the father of sociology as he has not only coined the term but was responsible for establishing sociology as a separate social science.

Meaning and Nature of Sociology

Study of human social life, groups and societies with focus on our own behaviour as social beings.

Sociological study focus not on the norms and values of the society but the way they actual function in actual realities.

The study is based on the observations, findings, and evidences without bias following certain rules that can be checked upon by others.

Sociology provides very wide scope and offers a specific way of looking at society and helps us to understand it in a better way.

It can focus on various aspects like interaction between individuals and groups, national or international issues (like hunger, unemployment, etc), culture and institutions (like family, society, etc).

Sociology because of its bearing upon many of the problems of the present world has assumed such a great importance that it is considered to be the best approach to all the social sciences. Giddings have rightly pointed out, ‘Sociology tells us how to become what we want to be.’

Importance of its studies lies in the following ways:

Sociology and its Relationship with other Social Science

Sociology studies all kinds of relationships while Economics only deals with only economic matters. Traditional economics is the production and distribution of goods and services. It focuses narrowly only on the allocation of scarce resources.

Modern economics focuses on the broader framework of economic behaviour provided by sociological approach, in a broader context of social norms, values, practices and interests.

Sociology is a science of society whereas political science is a science of state and government. Conventional Political Science was primarily focused on political theory (idea of Govt) and Govt administration (structure of Govt) rather than actual operation (governance).

Political Sociology focuses on the actual study of political behaviour- pattern of voting, decision making, popularity of a party, etc. It stresses on the inter-relationship between different institutions including Govt.

Conventional History only studies about the past based on concrete details. Sociologists are more interested in contemporary or recent past and are likely to abstract from concrete reality, categorize and generalize.

Conventional History has been about kings and war; history of gender relations, society, changes in land relations have traditionally been less studies which sociology focuses on.

Psychology is the science of human mind primarily focused on the human emotions, Sociology deals with the behaviour of the individual in the society, and different aspects of society which shape the individual.

Anthropology is the study of humans and the ways they live. Sociology studies the ways groups of people interact with each other and how their behavior is influenced by social structures, categories (rage, gender, sexuality), and institutions.

Both are considered as ‘sister discipline’, however the differences between them are: