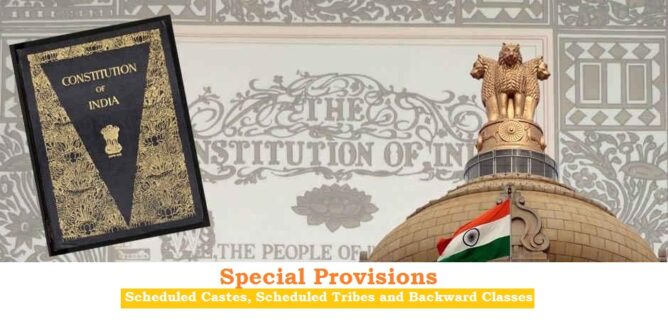 Constitution provides for safeguarding the interests of certain classes for equality and justice (as enshrined in the Preamble).
Part XVI (Art 330- 342) details the special provisions relating to SC/ST/OBCs and Anglo- Indians.
Constitution does not specify the castes or tribes to be called SC/ST/OBC but empowers the President to specify. (Though Constitution has used expressions like socially and educationally backward classes, weaker sections)

Unlike them, Anglo-Indian is defined in the Constitution. Anglo- Indian is a person who father (or any male progenitor) is or was of European origin, domiciled in India. Some of the provisions specified for them are:

The President may appoint a Commission to investigate the conditions of socially and educationally backward classes and to recommend the steps to improve their conditions. (ex: Kaka Kalelkar Committee 1955, Mandal Committee 1980)