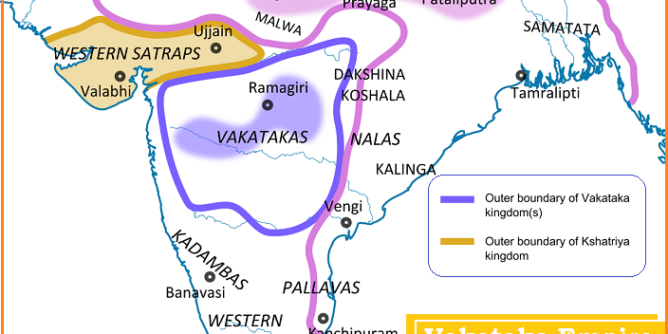 The Vakataka dynasty ruled parts of South-Central India (Deccan) from 250 AD to 500 AD. They were the most important successors of the Satavahanas in the Deccan and contemporaneous with the Guptas in northern India. The Puranas refer to the dynasty as the Vindhyakas. The Vakatakas, who were Brahmin themselves were great champions of the Brahmanical religion and performed numerous Vedic sacrifices.

Their state is believed to have extended from the southern edges of Malwa and Gujarat in the north to the Tungabhadra River in the south as well as from the Arabian Sea in the west to the edges of Chhattisgarh in the east.

With the death of Harisena II, the glory of the Vakatakas ended and the Nalas, the Kadambas, the Kalachuris, and Yasodharman of Malwa occupied their territory.