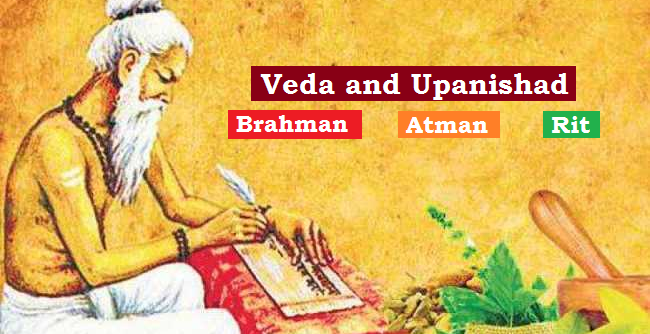 The Vedas are ancient Vedic Sanskrit religious texts. They are the oldest scriptures of Hinduism and considered to be the primary sources of Indian Philosophy transmitted orally to the next generation (called Stuti).

The Vedas are not authored by a human (called Apauruseya) and serve as a guide through its teaching (called Shastra). The words ‘Agama’ (tradition or that which has come down) and ‘Amnaya’ (sacred tradition handed over by repetition)are synonyms to the Vedas.

It is very important to note that in the Vedic tradition, we can only find either impersonal gods (like all nature gods) or quasi-personal gods. The Vedic gods resemble human beings that is even impersonal gods were animated. In Sanskrit, god means ‘Deva’ which means two things- one which gifts and one which shines; i.e., the source of light. Life depends upon light. So, naturally, life depends upon the gods.

The number of gods, it is said in the Vedic tradition is indefinite. However, it is desirable to make a list of very important gods, numbering thirty-three (33 कोटी is not 33 Crore but 33 types/numbers) , who hold key portfolios.

The idea permeating the Rigveda is that nature in all its diversity and multiplicity is not a chaos but is governed by a basic cosmic law (Rita). To this law are subjects not only all natural phenomena, such as the movement of the planets and the generation, decay and death of organisms, but also truth and justice. The conception of Rita further harmonized the gods with one another, and paved way for monotheism.

The Rig Veda refers to the supreme reality underlying and unifying all existence by the term ‘Purusha’ which is not only impersonal but beyond all names and forms, and hence is inexpressible and indescribable. It is immanent and transcendent – immanent because it pervades all existence, thereby rendering it a unity; transcendent, because it is not exhausted by existence but goes beyond it. That One (Tad Ekam) was later identified with Brahman or Atman.

Therefore the Vedas advocated spiritualistic monism which is the bedrock of Hindu religion and philosophy.

For a Vedic ritual to take place, it requires four Rtviks(roughly translated as Priests) who are considered to be the disciples of Sage Vyasa.

Veda is one source with three forms and this is often referred to as ‘Veda Trayi’ or Three Vedas. Three Vedas means the threefold creation.

There emerged a divergence of opinion in later Vedic stages as Brahmin class subscribed to the tradition of the Brahmanas, whereas the Kshatriyas denounced excessive emphasis laid on yagas which the Brahmanas specified. The origin of the Upanishads, therefore, is traced to the Kshatriya class.

The Brahman is the ultimate reality and the Atman is individual self (soul). Brahman is the material, efficient, formal and final cause of all that exists. It is the pervasive, genderless, infinite, eternal truth and bliss which does not change, yet is the cause of all changes.

Brahman is the cosmic principle: Brahman conceived as qualified (Saguna) is God (Isvara). The Absolute in relation to the empirical world is God. The cosmic Brahman is the creator, preserver, and destroyer of the world. All creatures spring out of Brahman. They live in Brahman and are re-absorbed in Brahman.

The Atman means the inner self, the soul, the immortal spirit in an individual, and all living beings including animals and trees. Upanishads state that the inmost core of every person is not the body, nor the mind, nor the ego, but Atman- “soul” or “self”. Atman is the spiritual essence in all creatures, their real innermost essential being. It is eternal, it is ageless.

In order to attain Moksha (liberation), a human being must acquire self-knowledge (Atma Jnana).

Are Brahman and Atman identical?

This also led to divergent schools of Indian Philosophy:

Concept of Rit (or Rta)

It is the principle of natural order which regulates and coordinates the operation of the universe and everything within it.

In the hymns of the Vedas, Rta is described as that which is ultimately responsible for the proper functioning of the natural, moral and sacrificial orders. Conceptually, it is closely allied to the injunctions and ordinances thought to uphold it, collectively referred to as Dharma, and the action of the individual in relation to those ordinances, referred to as Karma.

It is Varuna in particular who is identified as the “friend of Rta” and has universal power maintaining Rta. Aditya was being referred to as “the charioteers of Rta”.