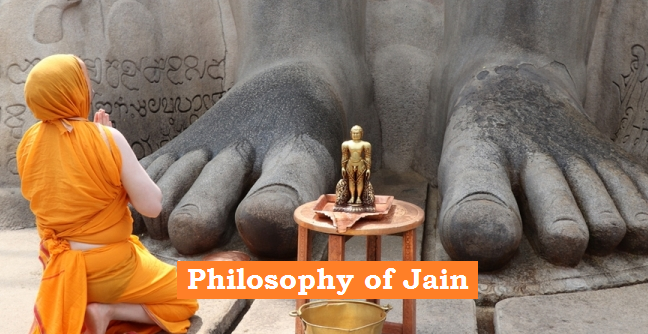 Jain Philosophy is one of the Nastika or Heterodox Schools of Indian philosophy. Jain thought is primarily concerned with understanding the nature of living beings, how these beings are bound by Karma and how they get liberated (Moksha) from the cycle of re-birth.

One of the main features of Jain philosophy is its dualistic metaphysics, which holds that there are two distinct categories of existence, the living (Jiva) and the non-living (Ajiva). It puts great emphasis on the practice of good life and non-injury to loving beings. The aphorism which has been accepted as the motto of Jainism:

It stresses the philosophy of non-violence and ecological harmony on which the Jain ethics and doctrines- especially the doctrines of Ahimsa and Anekantavada are based.

According to Jaina, the ultimate good for a living being (Jiva) is liberation from the cyclical world of reincarnation (Samsara) through perfect and complete knowledge (Tri Ratna) of all things.

According to its traditions, the teachings of Jainism are eternal, and hence have no founder. They believe in 24 Tirthankars or ‘Founders of the Faith’ through whom their faith has come down from antiquity. The Jainism of this age can be traced back to the 24th Tirthankar- Mahavira of the sixth century BC who was a contemporary of the Buddha.

Like those of the Buddha, Mahavira’s doctrines were formulated as a reaction to and rejection of Brahmanism (a religion based on the Hindu scriptures, the Vedas and Upanishads) which was then taking shape. Therefore, it is a Nastika or Heterodox Schools of Indian philosophy.

Jainism believes that the universe is composed of two main kinds of substances, the Jiva (living) and the Ajiva (non-living). These are un-created existents which are always interacting with each other. These substances behave according to natural laws and the intrinsic nature of a substance.

The universe functions through the interaction of living souls and the five categories of non-living entities:

According to Jain Philosophy, knowledge is of five kinds:

The first two are described as being indirect means of knowledge (Parokhsa), with the others furnishing direct knowledge (Pratyaksha), by which it is meant that the object is known directly by the soul.

According to Jaina, the ultimate good for a living being (Jiva) is liberation from the cyclical world of reincarnation (Samsara) through perfect and complete knowledge (Tri Ratna)of all things. Those who have such knowledge are ‘Kevalin’ (enlightened). This is the sum and substance of Jain’s idea of human destiny.

Without any rituals, Jainism lays down a definitive course of practical moral discipline, contemplation of the highest truth, and reorientation of life in light of these for attaining ultimate reality or truth, collectively called Tri-Ratna or Ratna-Traya (Three Jewels).

The three jewels, if cultivated together will ensure liberation. But if each of the three is practiced in isolation from the other two, it will cause conflicts or tensions. Individually, they are incomplete and insufficient because they are mutually dependent with one another.

Nature of knowledge: Relativity and Pluralism

Emerging from Ratna-Treya (Three Jewels) and relating to right conduct a strict ‘code of conduct’ is prescribed in Jainism, not so much for the sake of morality as the path to liberation. In fact, Jainism views religion merely as a science of ethical practice. It conceives the human body as a chariot on which the soul rides towards liberation.

They are the following: