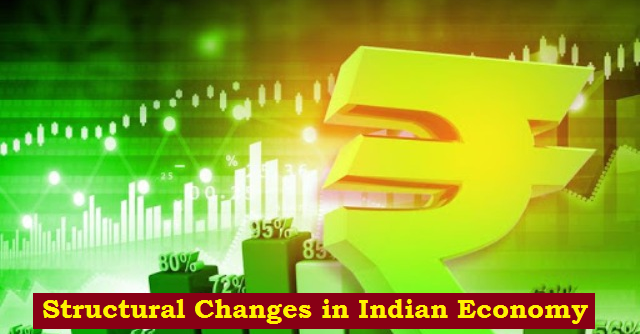 The World Economic Outlook of October 2019 has estimated India’s economy to become the fifth largest in the world, as measured using GDP at current US$ prices, moving past United Kingdom and France. The size of the economy is estimated at US$ 2.9 trillion in 2019.

Main Sectors of a GDP:

With differential growth of employment among different sectors of the economy, there have obviously been changes in the structure of employment. Among the three major sectors by broad division of economic activity, namely, agriculture, industry and services, there has been a decline, as expected, in the share of agriculture. The changing trends of the workforce are given below:

It has been generally expected that with shift of workers from agriculture to non‐agricultural activities there will be an increase in the proportion of workers employed on a regular wage and salary basis. However, there has been a decline in the share of regular workers and the share of casual workers has increased.

The shift is seen from self‐employed to casual workers category (called as ‘Casualizationʹ of workforce) and most of it has taken place in rural areas, from agriculture to non‐agricultural activities, such as construction, trade and services.

Changes in Role of Public and Private Sectors

The government in its industrial policy resolutions, from time-to-time, defines the area of activities in which the private sector and public sector are allowed to operate.

The Government of India had introduced four major reforms in the public sector in its New Industrial Policy in 1991. The main elements of the Government policy are as follows:

Contribution of Private and Public Sector in GDP