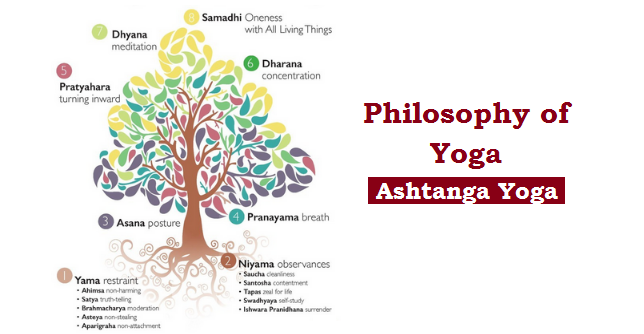 The word ‘Yoga’ literally means ‘union’, i.e., spiritual union of the individual soul with the universal soul and is used in this sense in the Vedanta. According to Patanjali, who is the traditional founder of the Yoga system, Yoga does not mean union but spiritual effort to attain perfection through the control of the body, senses and mind; and through right discrimination between Purusa and Prakriti. The ultimate goal of this philosophy is the absolute independence and eternal and free life of Purusa, free from Prakriti.

Yoga includes moral restraints, and spiritual imperatives, as well as the exercises (Asanas) designed to withdraw consciousness from the senses, focus the mind and ultimately achieve meditation in which the self is completely and transparently understood.

Meaning: Yoga is the cessation of the modifications of Chitta

Chitta essentially means the three internal organs of Sankhya- Buddhi (intellect), Ahankara (ego) and Manas (mind). Chitta is the first evolute (modification) of Prakriti and has the predominance of Sattva over Rajas and Tamas Gunas. It is in itself unconscious, but being finest and nearest to Purusa, it has the power to reflect the Purusa and therefore appears conscious.

When Chitta gets related to any object, it assumes the form of that object. This form is called Vritti (modification). Due to this modification, Purusha knows the worldly objects and Chitta, therefore, is the physical medium for the manifestation of Purusha (spirit).

Chitta may remain in five different stages or levels known as ‘Chitta Bhumi’. The different levels of Chitta are determined by the different degrees in which the elements (Gunas) are present in it. In each of these stages, there is some kind of repression of mental modifications.

Yoga advocates control over the body, the senses and the mind with the modifications of Chitta. Sensual attachment and passions distract body as well as the mind. They must be conquered.

To overcome them, Yoga gives us the Eightfold Path of Discipline or the Ashtanga Yoga: