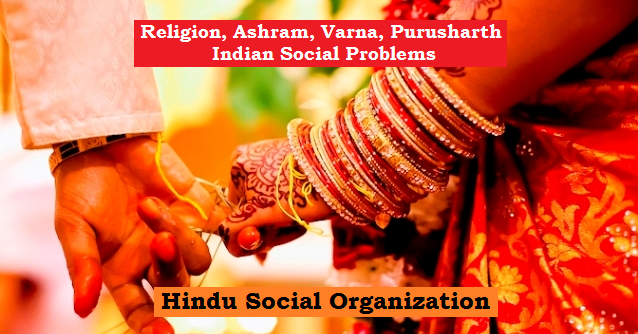 A life of Dharma stands for performance of duties as per the natural or cosmic laws (Rta) related to four stages of life (Rna) and to fourfold purpose of life (Purushartha). Following the dharma leads to prosperity and well being of the whole society.

The Ashram system was prescribed for the achievements of the values included in the concept of Purushartha. Under the Ashram System, human life was divided into four stages; every stage has social responsibilities and duties which contribute to the social stability.

In Hindu social organization, every political and economic activity takes place within the context of a Hindu view of life. The Varna System is dividing the members of the traditional Hindu society was an ideological construct where each varna is associated with a particular occupation.

Literally ‘Varna’ means colour and originates from the world ‘Vri’ meaning the choice of one’s occupation.

The Four Varna are:

Caste is that extreme form of social class organization in which the position of individuals in the status hierarchy is determined by descent and birth. This is similar to the hierarchy among varna, however, Varna and Caste are two different concepts. It refers to actual endogamous groups (community) in a Varna.

The higher castes claimed to have ritual, spiritual and racial purity which they maintained by keeping the lower castes away through the notion of pollution.

Purushartha is a Sanskrit word that can be translated as the “object of human pursuit” or “goals of man.”

It is related o the aims a person should have in his lifetime in order to have a good life and to achieve the ultimate goal of Moksha.

Dharma being the characteristic of human beings, leads to achievement of other goals with the ultimate goal of Moksha. All are intimately connected with each other, Dharma accompanies Artha, Artha means to Kama, Kama leads to Moksha. Dharma without Moksha is mere rituals, Artha without Dharma is greediness, Kama without Artha is lust.

Modern Indian is facing many social problems that have their roots in our socio-cultural traditions, demographic changes, colonial past and cultural-political processes.

Some of the major social problems of modern India are:-